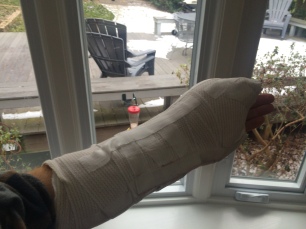 A propitious time for thumb surgery!

Maybe it’s because political exaggeration carries over to normal life, though you would seldom notice that by living in our very anodyne suburban communities.

In the Washington burbs, you might as well be in a normal place, say Minneapolis for example.  The miniapple – the metaphor is very apropos during a big snow.  We spent four winters there.  We know first hand.

I made a propitious marriage to a girl from New Hampshire.  Her snow throwing skills are legend having developed her technique from childhood. She’s had plenty of practice as I have usually managed to be thousands of miles away on business when the big ones have hit.

Her prowess was handy once again this time around.  The storm struck less than a day after a long scheduled Dupeytren’s release surgery on my left thumb.

There I was, forced into the unmanly role of spectator to an awesome display of sisu.  She shoveled almost around the clock for three days and pinned ole SnowZilla to the mat.  (The moral of this story:  Never mess with a full-blooded Finn, even if you are Mother Nature!)

If you recall from my previous post, my wife told me not to put up that flag.  Seeing the resulting karma in action is believing, so rather than write about it, here’s a down and dirty video I threw together to prove it.  Enjoy!

**I use cloud sharing services because copyrighted music is involved and cannot be used for public performance.  Thanks to Mannheim Steamroller for some great music.** 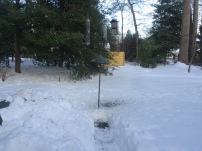 Jonas.  We kicked your butt! 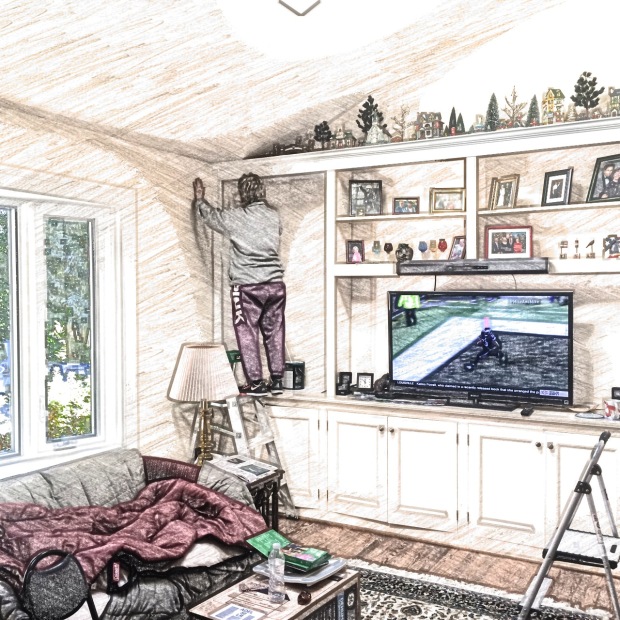 Time for momma to paint. (Photo altered with the Pencil Sketch app.)

When we downsized, we bought a “functional” house and remodeled it in a way that our real estate agent says is attractive empty-nesters like us.  It is a custom built three bedroom bungalow in a neighborhood with which we’ve been associated for more than 30 years.  We adore the convenience, setting and the nature associated with the Rock Creek national recreational trail that helps define our leafy ‘burb.

This is our “forever” house.  After a lifetime of moving, we’re dropping anchor.  Like any of the 13 houses we’ve owned, this one has its challenges.  You adapt them to you where you can and you adjust to them as needed.

On the plus side, we love the backyard and low-rise deck.  We moved the laundry from the basement to the smallest bedroom in a way that a conversion back to a bedroom would be little more than a few bucks and a couple of hours work.  We also vaulted the living room ceiling, installed a bow window and skylights and opened up the entry to a glass-enclosed sun room. This house was built in 1953, so kitchen and bath updates, new windows and doors were necessary.  Soy foam wall insulation added R-21 to our walls and drastically chopped heating and air conditioning bills which helped pay for the remodeling.

On the downside, the over/under stairs to the attic and basement made it impossible to open up the kitchen, a feature we miss.  An expensive elevator we couldn’t afford would have solved that problem, so you adapt.  There are other nits, but that’s the biggest one.

We got rid of enough furniture, but not enough junk before moving in.  Our daughter occupied the basement au pair suite for awhile and we still are harboring a ton of her “stuff” that doesn’t fit into her nearby apartment.  Storage space is at a premium.

Everyone’s excess is choking the utility portion of the basement.  We also need new furniture.  Ours has been moved nine times including once overseas.  We decided to wait to buy furniture and paint permanent colors until we had the house figured out.  After four years, we’re ready.

Here’s where the joy$ come in.  Retirement is expensive. Some things you can anticipate, like the need for long-term care insurance if you can afford it. Then there are the unwanted gratuities that arrive as bolts out of a blue sky.

My wife totaled her car two weeks ago.  Fortunately she was uninjured.  Ker-ching!  Okay.  Maybe we don’t want to and it’s going to pinch, but we can absorb the added cost of replacing a late model car after the insurance payout.  No sooner than we had the replacement home, the check engine light winked on in my car.  Oh, oh.

The little red check engine light proved to be lipstick on a painted lady.  Her price for going all the way was eye-popping. In a matter of months I would have “invested” a lot more than the car was worth, so I donated it to public radio.  I’d been coveting a sexy a Subaru Forester for my trail work anyway, so I didn’t need much of a nudge to breakup with an old floozy who overplayed her hand.

Naturally none of this was in the budget, especially buying two cars in two weeks.  Of course, there’s more work to be done on the house and yard.  We’ve begun repainting the interior and will be hunting for new furniture soon.  Hard to undo that.  Then, we always seem to need something like new glasses.  My hiking adventures aren’t cheap either…

Among other things, here’s hoping a pipe doesn’t freeze this winter.

UPDATE:  It was a buggy summer.  Progress on the landscaping has been slow, but there has been some.  The next big push on that front will be a pruning and transplanting just before spring arrives. Over the winter I’ll build a retaining wall at the bottom of the slope pictured below.

Williams College, Williamstown, MA. October 12, 2014 — While autumn is coloring New England in its full palate, this morning’s heavy frost signaled that the iron grip of winter is just over the horizon. 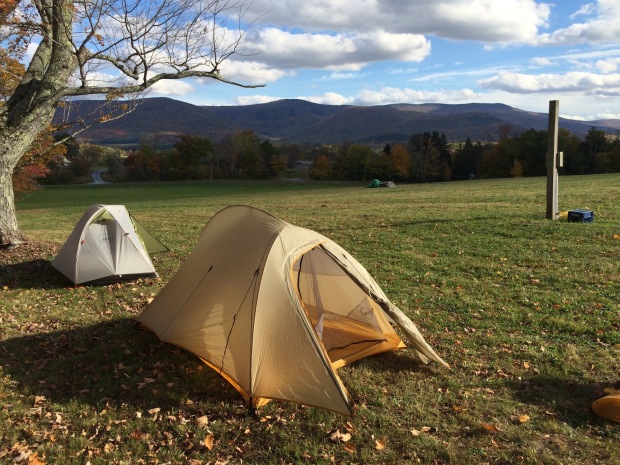 It was the perfect set for staging the 33 “gathering”of the Appalachian Long Distance Hiking Association (ALDHA) where life was good. How could it not be in the warm clear light shining in the Berkshire Mountains of western Massachusetts.

The gathering is an eclectic mix of bearded men and sinewy women with a common love of outdoor movement no matter where or when. They live to be “out there” wherever there is.

The atmosphere is part Rotary Club – the parliamentary procedure, singing, backslapping and humor is the same – with a little Comic Con thrown in – lots of eccentricity with more that a dash of introversion in the mix. Everyone is welcoming and nice, but it’s obvious why these beautiful folks like to be in the woods alone or otherwise.

Many members adorned themselves in typical hiker regalia. Given that most everyone appeared to be a cross between Gandalf and a homeless person, it was no wonder that a few students called campus security curious about this strange group which was invading their campus. Of course college was well aware of our presence as guests of the Williams Outing Club.

The eclectic program exceeded my expectations having set the bar relatively low given that ALDHA is totally run by volunteers. The opening program was uplifting but a bit long. Of course my favorite part of opening night was the special recognition of the AT thru hiker class of 2014. We each received a certificate and a patch.

Overall, I was reminded of a high school reunion or a college homecoming. Everybody was hugging old friends. In addition to meeting my fellow Fourteeners, the opportunity to meet or reunite with hikers I followed from 2013, hostel owners and other trail characters was special and uplifting.

The broader program featured a surprising array of seminars ranging across subjects such as women’s self defense, hiking in the UK and other international destinations, the triple crown trails, search and rescue, ultra light gear, trail diet, writing, photography, and aging. Of course there were the obligatory business meetings and elections.

One of the most interesting discussions involved expectations and opportunities around the release of two hiking movies – “Wild” and a “Walk in the Woods,” the latter based on Bill Bryson’s best seller which stars Msrs. Redford and Nolte. Needless to say a zoo full of ill-prepared hikers are projected to jam the trail after these movies play.

I also learned that the next several years will emphasize improving the trail in Maine where erosion and sometimes dangerous river crossings need to be addressed. Amen!

I think it’s safe to say a good time was had by all. As for me, to shamelessly borrow from Arnold, “I’ll be back” next year.

Now it’s on to Main for another lesson I cutting and moving big rocks. 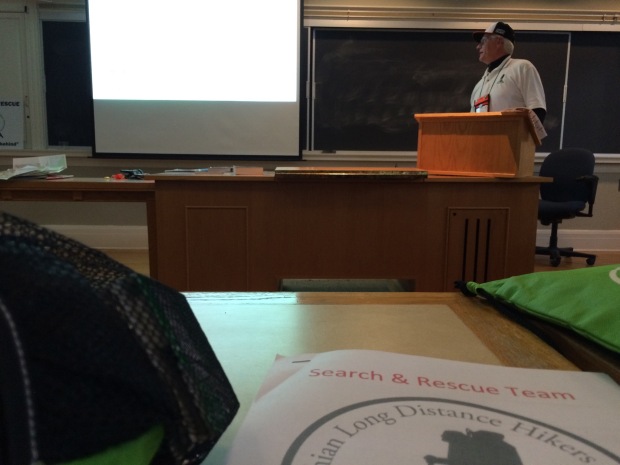